A few weeks ago Mitch and I kicked off the new year (and new decade!) the best way we know how…with a road trip! We decided to fly into Seattle and finally make the trek to a place that’s been on our list for a long time: Vancouver, British Columbia.

We started our journey by traveling first through North Cascades National Park in Washington, and then driving across farmland British Columbia as we made our way into the city limits of Vancouver. For any Smallville fans like my husband, we even got to see the iconic Kent Farm on the way to the city. Only a few miles across the country border and our trip was already made!

But Vancouver more than surpassed our expectations. We only had a short weekend to take in all the sights, but our brief time there more than made a lasting impression. Here are a few highlights from our first, and surely not the list, trip to Vancity.

Gastown was one of my favorite neighborhoods we wandered through. The iconic Gastown Steam Clock was worth the walk alone, but the quaintness and warmth of the lighted cobblestone streets made me feel like we had taken a trip back in time. There were dozens of shops, restaurants, bars, and souvenir shops sprinkled across this part of town. Being able to see the breathtaking Vancouver Lookout tower swerving between the buildings walking street to street was another element that made this part of town so majestic.

The other neighborhood we spent the most time in was Yaletown. Luckily for us, our hotel was located smack dab in the middle of both of these bustling and inviting neighborhoods. Yaletown reminded us of LoDo in Denver, CO – young professionals, busy restaurant and bar scene, and samplings of modern yet rustic decor. 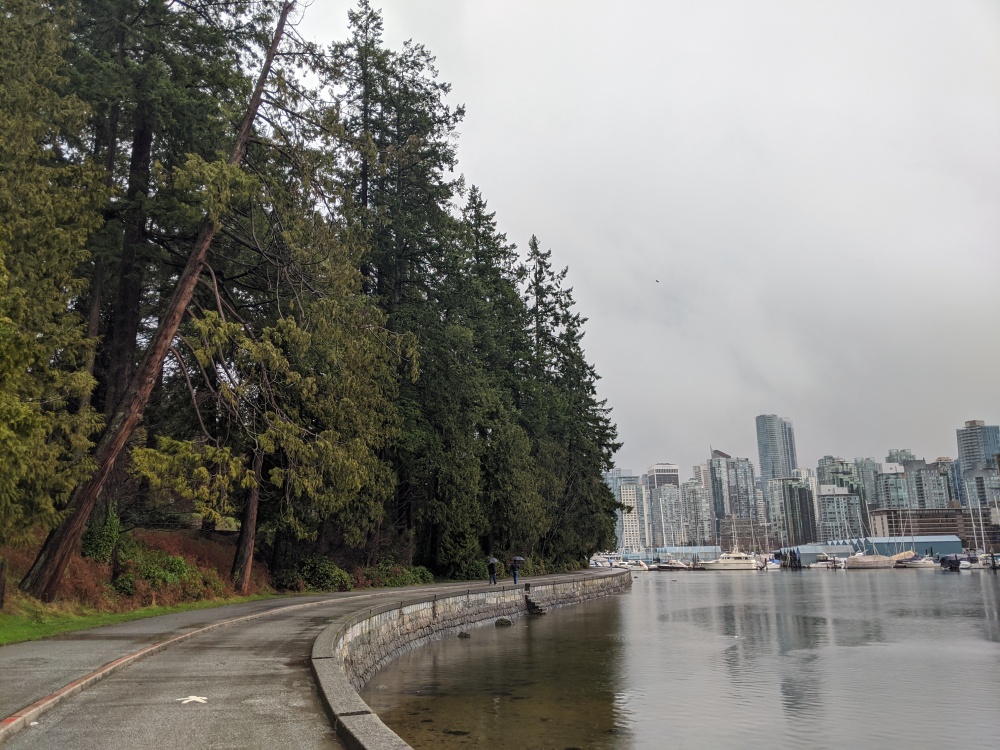 It feels like most major cities have some green space they like to brag about to keep them environmentally friendly or humble amongst their gigantic skyscrapers, so to be honest I was maybe a little skeptical of the hype for Stanley Park. But I quickly learned the hype was more than well justified. The famed Vancouver Aquarium is located in this part of town and the green space isn’t the Central Park vibe you may be thinking of. The tall evergreen trees, the lines and lines of boats boarding the view of the city skyline, these are the photos that dreams are made of.

Walking through downtown Vancouver, we stumbled upon Canada Place – a conference and convention center reminiscent of the Denver International Airport (DIA) with their white tarped peaks lining the roof of the structure. Located right on the Port of Vancouver, you’re able to walk The Canadian Trail – essentially a Walk of Fame lined with names of territories and provinces in place of where you might expect to see celebrity names in Hollywood. The views from the point – looking at the beaming evergreens from Stanley Park, the majestic Lions Gate bridge over to North Vancouver, and the sprawling buildings and homes from across the waterways, it’s absolutely breathtaking. Follow the walkway over to the Digital Orca – a pixelated statue of a killer whale, and along your walk you’ll be able to watch passenger planes taking off and landing right on the waterways. 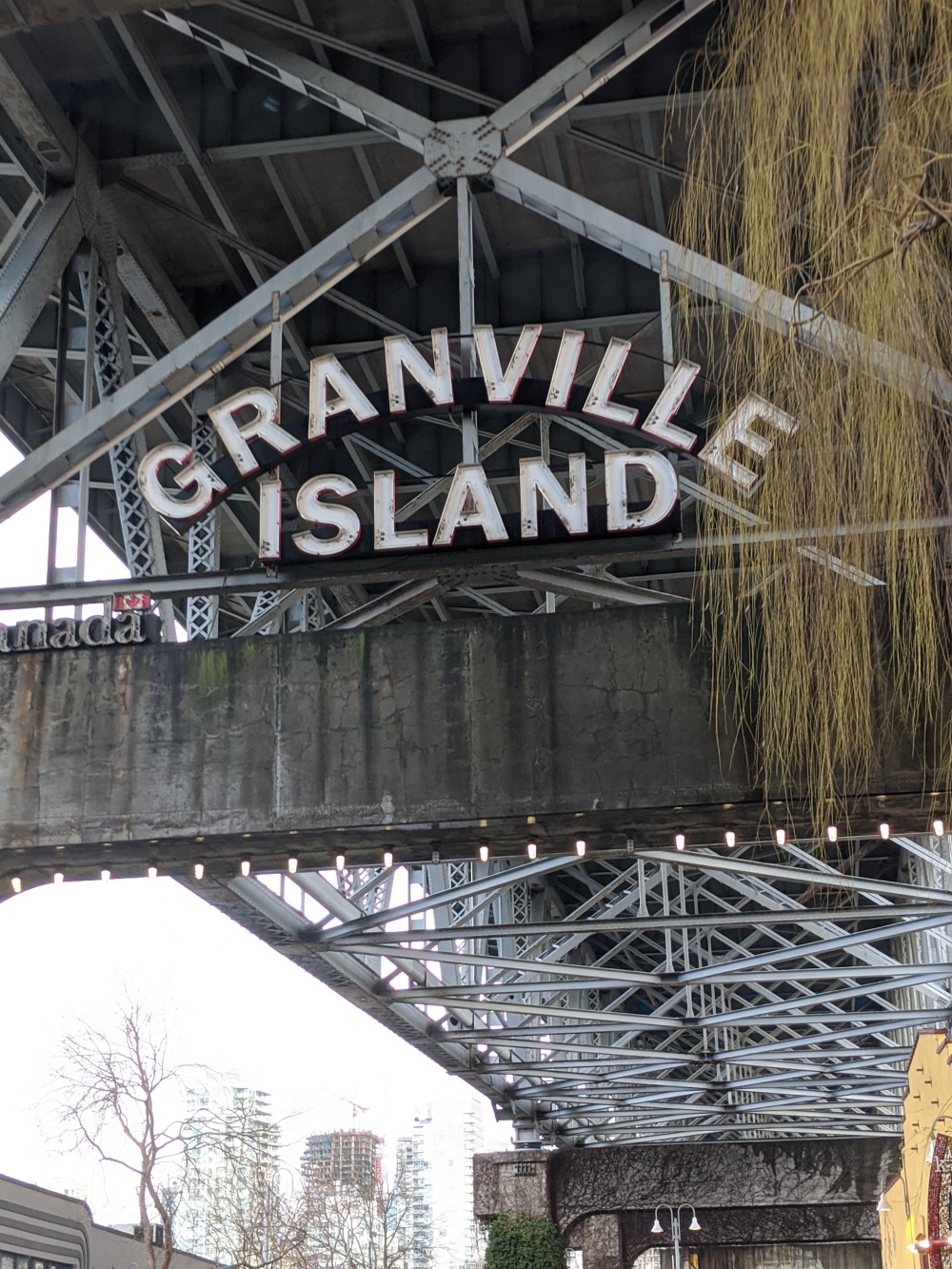 Next, we headed over to Granville Island – a popular marketplace and iconic neighborhood located under the overpasses west of downtown. Granville Market is a bustling and popular indoor walkway of goodness – from all the different types of food vendors you can possibly fathom. Our choice was to try Lee’s Donuts – a longtime favorite of Vancouverites and staple of the market. Even with a long line outside they didn’t disappoint. My only disappointment was that I unfortunately dropped my little piece of deliciousness only minutes after getting to savor the first few bites! 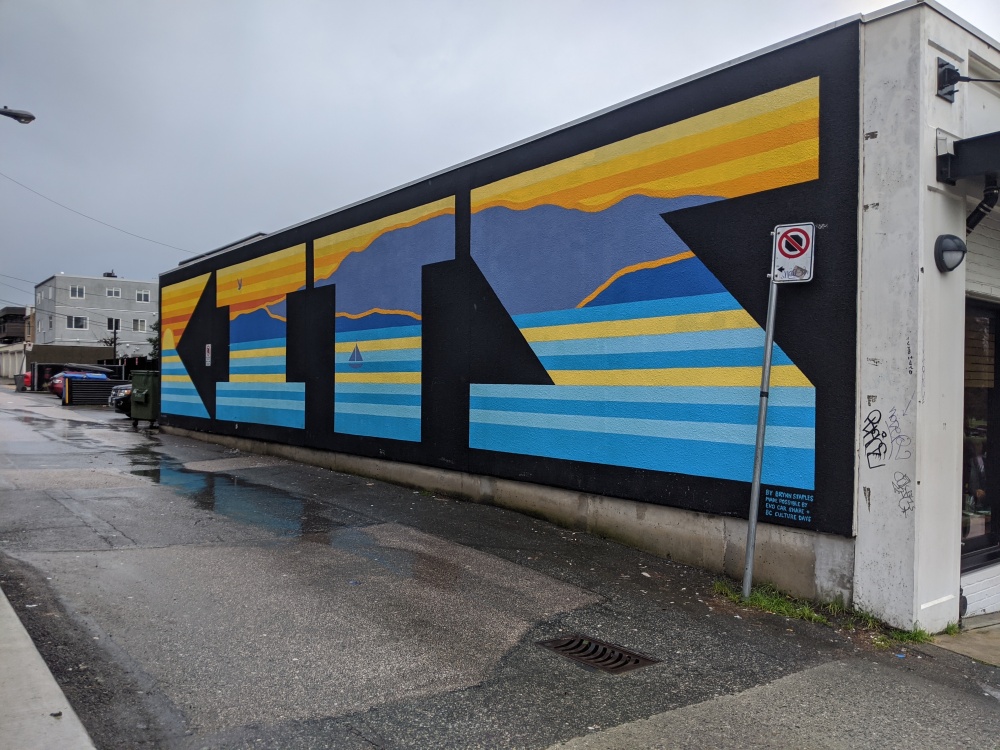 The rumor mill was buzzing with whereabouts of where Megan and Harry are making their upcoming homestead as new Canadians, and with being known for the Beverly Hills of Vancouver, we had to of course do an investigative mission for any sightings in the Kitsilano area. The homes here are absolutely gorgeous. If this place couldn’t get more magical, wait until I tell you there was actually a beach here too! But the real cherry on top for us was finding a local restaurant/watering hole that gave us some of the best food of our trip – Local Kitsilano. A friendly and laid-back establishment, the food here helped us fuel up for our next adventure – traveling up the Sea to Sky Highway.

We’ve driven some pretty epic roads during our adventures, but the Sea to Sky Highway is definitely up there as one of the coolest and most majestic. With stunning evergreen rolling hill type of mountains lining one side of the road, and dramatic breathtaking water landscapes on the other, it’s no wonder this route got the name it did. Unfortunately due to our shortened sunlight during the winter, we had to turn back after Lions Bay – but just through Horseshoe Bay and Lions Bay alone were enough to leave a magical memory.

The Capilano Suspension Bridge is something I was both overly excited, and then overly terrified of, fluctuating on a pretty much hourly basis leading up to our adventure. It turns out both feelings were accurate – the swinging rope bridge across the raging river in the valley below was definitely not for the faint of heart. But the views and the treetop village that awaited on the other side? More magical than I can put into words. We completely lucked out that they still had their holiday lights display set up and, normally I’m a sucker for some hipster lights anywhere, but decked out across the forest made us feel like we were in real-life Ferngully (props to you if you get that reference). Playing through the treetops and along the cliffside quickly made this place one of the coolest places I’ve ever been, hands down.

Outside of the incredible sights and neighborhoods, I can’t write about our time in Vancouver and not mention the incredible food you can (and we did!) find everywhere. Particularly with the Asian population, it felt like you couldn’t go more than a block without stumbling upon an Asian restaurant. While we were there, we had ramen and thai food, and both tickled our taste buds.

One of my coworkers recommended 49th Parallel to us and before I even tasted my drink, I knew it was about to be one of my favorite coffee shop experiences. Partnered with Lucky’s Doughnuts, I stood in the cue slowly walking by the delicacies that were these fine bakery arts. The color of 49th Parallel is my favorite – teal blue – and their design is killer. All that paired with when I finally got my cup to go, I happily sunk into a state of warmth and happiness.

We knew a lot of shows were filmed in Vancouver, but we had absolutely no idea how many shows were filmed in Vancouver. At the time of our visit, there were at least 20+ TV shows and even more films being filmed in and around Vancouver. Walking back to our hotel the first night in town, we literally stumbled upon a movie set and a production crew setting up to film. As two fans of star sightings, we happily kept an eye out for any and all celebrities.

It’s no exaggeration that Canadians are friendly, warm people. And Vancouverites are no exception. From a cultural melting pot of a metropolis, to the small acts of kindness demonstrated daily all around you – Vancouver is truly one of the happiest and friendliest places I’ve been to in nearly every sense.